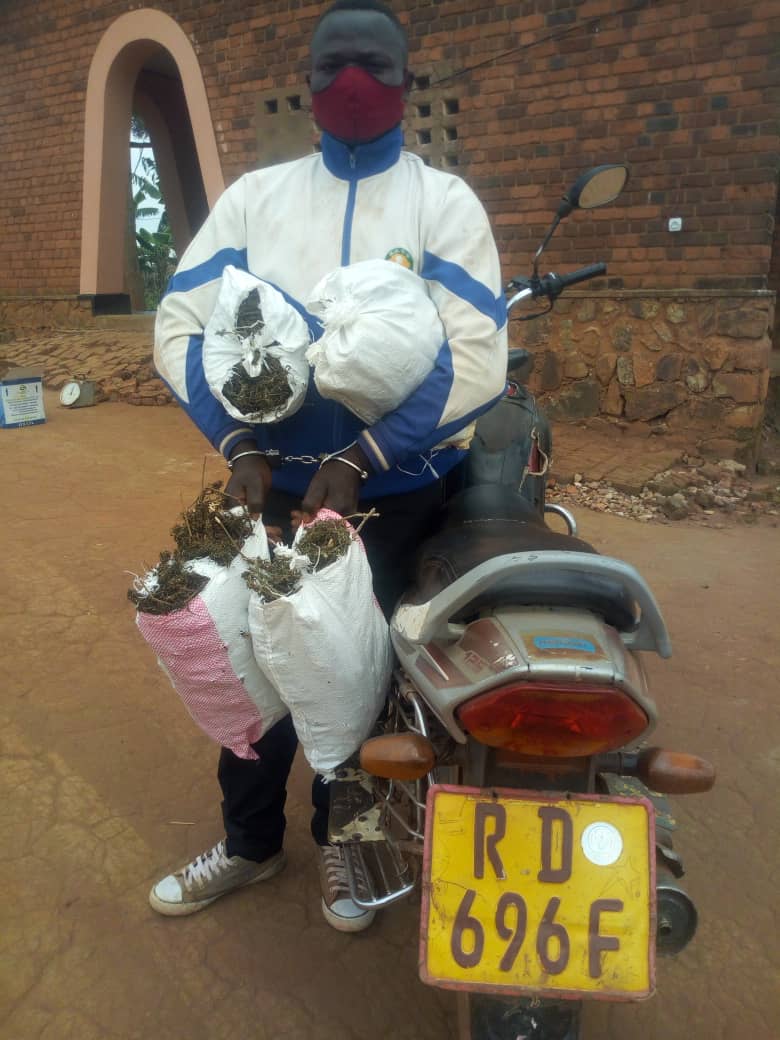 The District Police Commander (DPC) for Rulindo, Chief Inspector of Police (CIP) Pacifique Semahame Gakwisi said that Hafashimana, who was at the time transporting the narcotics on a motorcycle, was heading to City of Kigali from Burera District.

The narcotics were concealed in four small sacks.

CIP Gakwisi said that Hafashimana was reported by residents of Mugote after they got suspicious of what was in the four small sacks that he had on the motorcycle.

"On his way to Kigali, Hafashimana made a stopover in Mugote trading centre. Residents suspected him to be a drug dealer and they called the Police. The deployed officers arrived shortly, checked the luggage and confirmed the residents' suspicions. The suspect attempted to flee but Police and residents pursuid and apprehended him," CIP Gakwisi said.

Hafashimana, who was handed over to RIB at Murambi station, is a resident of Ruhunde Sector in Burera District, where he allegedly got the narcotics and was at the time heading to Kigali to supply his customers.

CIP Gakwisi lauded the residents for the vigilance. "If you suspect someone to be engaged in criminal activities, just call the Police or other relevant authorities in the area."

The Ministerial order nº 001/MoH/2019 of 04/03/2019_ establishing the list of narcotic drugs and their categorisation go classifies cannabis in the category of "very severe narcotics.’’

Article 263 of law No. 68/2018 of 30/08/2018 determining offenses and penalties in general states that any person, who unlawfully produces, transforms, transports, stores, gives to another or who sells narcotic drugs and psychotropic substances, commits an offence.

Upon conviction for very severe narcotics, the offender faces between 20 years and life imprisonment, and a fine of between Frw20 million and Frw30 million.